A CLINIC destined for Tomaree Library once a month will assess children and adults for scotopic sensitivity, otherwise known as Irlen syndrome.

For sufferers, the tell-tale signs are varied when reading, from words jiggling and swirling on the page – sometimes disappearing entirely.

And when writing, letters and words are often misplaced.

The syndrome is not considered an optical issue but it’s treated with tinted lenses – with clear benefits for wearers – despite some people’s skepticism.

Dr Joan Brien is based at Wallsend but will offer the Tomaree clinic on the second Monday of each month.

She’s taken on the baton from the late Greg Robinson who started scotopic sensitivity diagnostic and treatment work with the special education unit at the University of Newcastle.

The coloured lenses are believed to filter out the spectrum of light that is said to interfere with visual processing.

Harmonie Baker, 11, goes to school on the Tomaree Peninsula, and was told she had the condition in Year 1.

“Reading was really hard until I tried on the glasses,” she said.

“When I’m not wearing them the letters move around on the page. They kind of swirl like a cyclone.”

Her mum, Kate Baker, remembers the day the jigsaw pieces fell together.

“My cousin said ‘can I just try something’ and Harmonie tried the glasses on,” Kate said.

“She flew through the book, it was life someone flicked a switch, whereas before she would mix words up and miss full stops.”

Harmonie started out in green lenses but has since benefited more from lilac ones.

Next year she starts high school.

“It’s definitely helped with my grades,” she said.

Dr Brien said some people suffered more than others.

“For some people the words swirl so much they feel nauseous and many people have unexplained headaches,” she said.

“There are a lot of people just living with it.

“As many as one in five have at least some of the symptoms.”

Irlen Syndrome is so named after Helen Irlen who developed the Irlen Method of treatment in California. 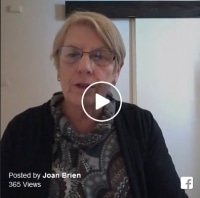 THE TREATMENT FOR IRLEN SYNDROME

The treatment for Irlen Syndrome is NOT a programme but IS a method to help visual processing dysfunction. Many critics of Irlen suggest that if

This article demonstrates how important it is for children to be screened for the presence of Irlen Syndrome, which is a Perceptual processing dysfunction, sometimes

Irlen Diagnostic Clinic Newcastle is a NDIS Registered Provider (#4050012024) supporting children who are struggling at school for no apparent reason.